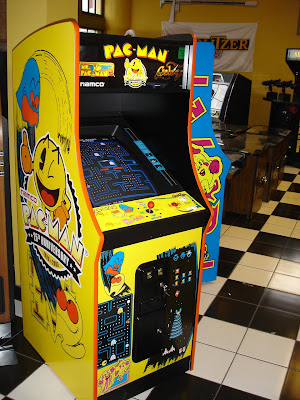 Since the genesis of home video gaming in the 1980's parents, teachers, psychologists, behavioural therapists and all sorts of other scientific quacks have been trying to figure out whether computer games really do affect the behaviour of children, teenagers and adults in a negative way. I'm not going to get into that whole debate (because the answer is obviously YES, I mean, first person shooters clearly created the global sub culture of taking guns to school in order to cap off teachers and classmates) but instead focus on the whys and wherefores of a more specific statement supposedly made in 1989 by the CEO of Nintendo himself. 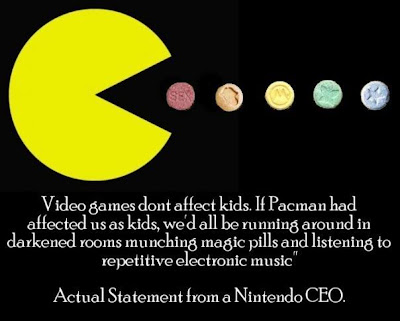 This quote was apparently made by one Kristian Wilson, a man entirely UNinfamous as according to the records in 1989 Nintendo was being run by a Japanese geezer by the name of Hiroshi Yamauchi. Yamauchi was in the same position as far back as 1950 and, so 'records' show, still holds the same position today. Legend. That's 61 years! Surely that can't be right....dude must be pushing 100, can you see him throwing himself around the front room and smashing vases off the table with a Wii remote? I can't. Saying that, my great great Uncle Frank fought in both world wars, went swimming every day until he was 100 and finally succumbed to old age at 105, so anythings possible. RIP Uncle Frank.

Donning my Columbo/flasher trenchcoat, complete with cigar and gammy eye, I took it upon myself to seek out the truth behind this urban myth. With the help of the internet, I managed to solve the entire conundrum within roughly 60 seconds. This particular plot wouldn't have made a particularly interesting episode of Columbo, but I don't write Columbo (unfortunately), I write this blog, so go figure.

Upon intense research, CSI: Crime Scene Investigation style, I dug up this short statement from a BRITISH (wooo!) comedian named Mark Brigstocke who had the following to say on the matter :

"It is my joke. I wrote it, then I took the rest of the day off as I was so chuffed with it. I am gutted that it has been claimed and passed around by so many people. Intellectual property law will not save me, the false claims will continue until I am man enough to give it all up. All I can say is — it seems that it is very unlikely that it was written by a Nintendo employee in 1989, being as Pac Man was still around and not much of a childhood memory, there were very few claims that gaming influenced children's behaviour, and that the wording of it is identical to how it has been delivered in my stand up routine for 6 years! For those that are interested it has also been atributed to Bill Gates, but then so has Windows! Bitter? Well perhaps just a little. It was sent to me by someone at Channel 4 a few years back after I did it on Channel 4 in a late night stand up show!"


WOW! Now aren't we all glad thats been cleared up. I tend to believe this Mark Brigstocke character and would like to salute the man on a very astute observation. He was bang on the money.

Pacman gets caught by the Boy Dem shotting food on the corner before a Happy Mondays gig, circa 1990 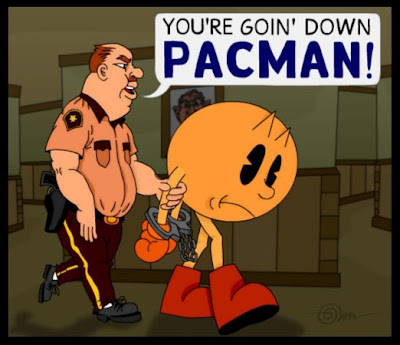 With regards to computer games, I am a massive nerd for the 8 bit and 16 bit consoles and old arcade machines (Double Dragon, Marvel Vs Capcom, Vendetta etc) but after that I kind of lost track. I own a couple of NES' (one was purchased in Cash Converters with the gun, all the leads and accessories and a couple games for FOUR QUID) a couple of Megadrives (one of which I liberated from a skip a number of years ago with a bag full of games, fucking bonus), a Sega Master System and I still have a Playstation 1 hanging about somewhere, but after Wu Tang : Taste The Pain got played out it pretty much died the death. 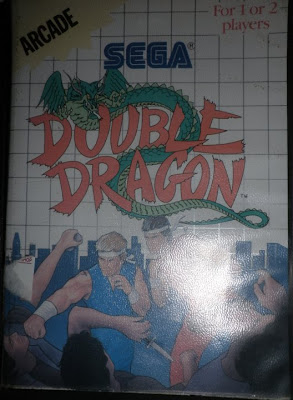 Still, don't front on the kid, I got mad skills on various games old and new (ask Tyni or Stig how I get down on any Streetfighter game), I just don't have a PS3 or Xbox 360 of my own. If I did, I'd have even less of a life going on than I do now. I do however own an original Xbox, purchased off of my boy Polish Magic for £70 a couple of years ago. The trip with that is that the things been chipped, meaning it contains literally about 30,000 games ranging from the Atari 2600 & ZX Spectrum and covering every home computer and console system all the way up to the N64. That bitch even has the hard drive unlocked so theres like 15 Xbox games up in there, including the 50 Cent joint and The Warriors. Dr Syntax and I once had an epic, bone crunching fight in the bog while playing The Warriors (an incredible game), which I won by smashing his head repeatedly against the toilet seat. Then we carried on playing the game.

Needless to say I will be wittering on about 'retro gaming' more in the future, as I intend to do with all of the other subjects that I geek out on on a regular basis.

As an aside, my obsessions with ear piercing electronic music, epilepsy inducing graphics, frustratingly difficult gameplay and all computer systems that haven't aged well at all aren't just limited to button bashing and staring mindlessly at television screens. They have also invaded my clothing habits, to a certain extent.

I copped this joint in Australia in December 2009. I think I've worn it once, just before all of the 'cool' kids (who aren't even old enough to remember what a NES is) started rocking similar garms, including those mother fucking Mario '1 Up' mushroom tees that I can't stand (again, because all of those super trendy twats in their late teens wear them). 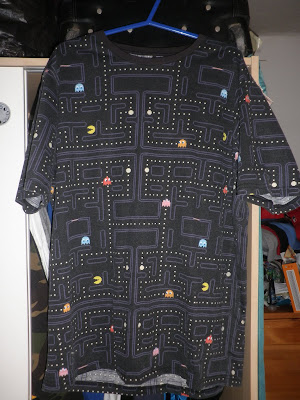 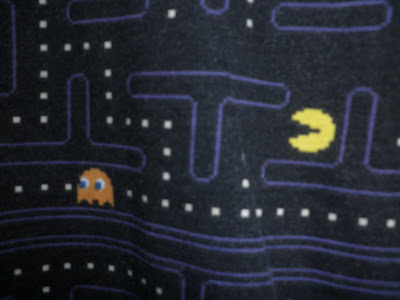 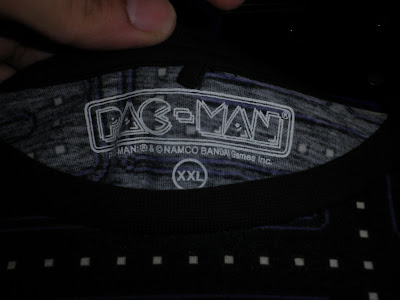 I would, however, be inclined to break it out once more if I were able to get my hands on one of these beauties :

STANDARD. Now you're playing with power.
Posted by Enlish at 09:09