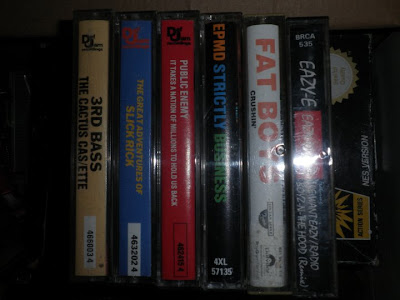 Inspired by Nas' TDK memories. Go to the post below and check it if you haven't already, its pure science.

Cassettes. Home made mixtapes. Elaborate tracings of Wu Tang logos for the sleeve. First attempts at 'tag' writing. The thing I probably loved the most, or at the very least learned to appreciate about the humble tape is that no matter how hard you tried to fast forward or rewind to your favourite song (people who had a counter on their deck and all of the numbers written down can pay this no mind) you could never get to the right spot, unless you were extremely lucky....and even then it was once in a blue moon. The frustration that was born out of this process made me simply press play and patiently listen through an LP until I got to the song that I really wanted to hear. A byproduct of this revelation was that I would inevitably come to appreciate the other songs as much, if not more than the song I was waiting for in the first place, thus appreciating the entire album as a body of work. The digital culture that 'kids these days' rely on is built on A.D.D. ipod shuffling and endless mp3 downloads; back when I was a youth things were much simpler. Hip Hop Music was (and still is, to some) something to be cherished and appreciated far more than it is today. At least I tend to think so. 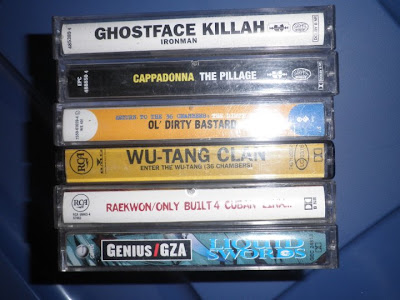 Anyways. Not really that long ago, probably about 7 or 8 years, after I had graduated up to CDs, Vinyl and Minidiscs (remember those?) I took a semi-regular trip up to the classic Mabe car boot sale back in my native Cornwall. The lads and I would get high in the car before stumbling around a giant field buying bags of broken clotted cream cookies, scoping out for NES games, A Team action figures and anything else that looked dope and worth a few coins. On his particular occasion we walked past a bizarre looking middle aged couple, reminiscent of The Frog Brother's parents in The Lost Boys; kind of a spaced-out-hippy husband and wife with the obligatory circular Lennon sunglasses, shitty hemp clothing, you know the type. And they had tapes. Not just any tapes though, we're talking TAPES. 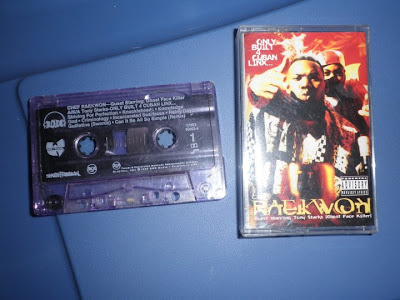 I went picking through the various boxes and found one in particular just crammed with gems. We're talking all the original Wu Tang albums (as pictured, nearly), all of the original Def Jam releases (PE, Slick Rick, Beasties etc etc), NWA, 2 Live Crew, Boot Camp Click, some Hiero, Souls of Mischief, basically just a shit load of pure goodness. I already owned all of these albums of course, but the situation was so bizarre and I knew for a fact that I would never see these folks again so i started harvesting. Upon inspection of the contents of the boxes it transpired that every single tape had the original receipt tucked, completely crisp, inside the sleeve. Using my geek brain I ascertained that at least in the case of the Wu joints most of them were purchased on the actual release dates. Whoever owned these was clearly a stone cold head.

Attempting to conceal my obvious state of ecstacy, I calmly asked the couple how much each tape would cost. £1. ONE POUND. The only problem was that I had basically picked out about 30 and I had about 17 quid on me. Luckily, the lads all chipped in and loaned me the cash so I could get all 30 joints. They, of course, continually questioned me as to why I was spending 30 quid on LPs that I already owned, but sometimes theres no explaining these things (especially to people that just don't understand). So, the money changed hands (the old dude was completely chuffed with the sale aswell) and I was handed a Tesco carrier bag stretched to bursting with my brand new second hand spoils (including the PURPLE TAPE. Soooooo!). 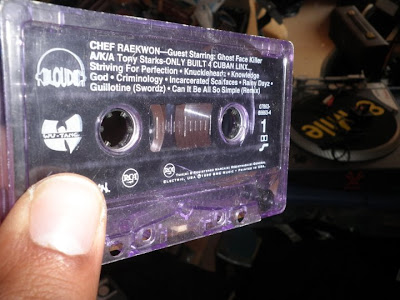 There was still one thing bugging me however, so just before we bounced I had to ask Steptoe what the deal was. "I hope you don't mind me asking, but where did all these tapes actually come from? They're all classics, I can't believe it."

"Oh, they all belonged to my son. He moved out of the house years ago and they've just been sitting in the loft gathering dust."

Without even really wanting to know the answer, I asked the inevitable question : "Does he mind that you're selling them?"

And with that he moved onto the next dude, trying to sell them a broken hairdryer or a Dire Straits T shirt. I couldn't fucking believe it. I bounced with the tapes, of course, there was no way I was going to give them up and he probably wouldn't have given up the money anyway. But can you imagine the scene the next time dude went back to his parents and got up into the attic? "Dad, where are all of my Hip Hop tapes? The ones that I kept completely immaculate with the receipts still inside?"

"I sold them." Cue hideous family war. Poor bastard, I still feel for the guy (pause).

Now they're in MY father's attic, boxed up, receipts still inside. My old man knows the deal though. Its straight euthanasia if you even think about car booting my shit. Standard.

Stick that in your deck and dub it.
Posted by Enlish at 13:15