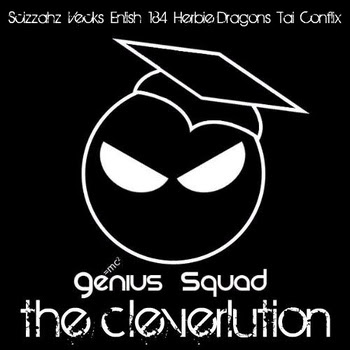 Ok, so heres the cuts from the Genius Squad LP/Mixtape that we dropped last year and that I feature on. I'm actually last on most of the joints because I'd bowl back from the pub off my nut and find the lads recording, then crowbar my way onto the end of the track. Real classy.

The boys might kill me for jacking these parts and putting 'em up for free, but fuck it. If they shoot me, hopefully my LP sales will increase.

This project is the result of far too much drink, smoke, chemical substances, fast food, free time and - for one of us - a serious Haribo addiction.
Put together by Brighton's infamous Genius Squad over a few hazy years, it's a little slice of history.
It ain't perfect, but we like to think it's got soul.

Hope you people catch as many jokes listening as we did making it.

All tracks mixed and mastered by Scizzahz

*Make sure you keep an eye out for my Rap Ain't Real & Cold Lazarus albums dropping soon, preceded by the AA side single Arrogance Is Bliss/Brain Basher produced by Ido and Scizzahz respectively. 'Arrogance' features Sean Price (BCC), Stig Of The Dump and DJ Manipulate. Keep an eye out for that.