Geeking Out With The Space Jam Triple Play Action Set

I've been off my geek tip for a while but I'm coming back hardbody son, real talk. As you all know, I am an avid fan of Michael Jordan, from his skills as a basketball player to the fact he essentially created the greatest line in training shoes EVER. This is an undebatable fact.

So, as an avid fan, it would only be right for me to own Michael Jordan action figures, right? Right. Peep the Space Jam Triple Play Action Set. 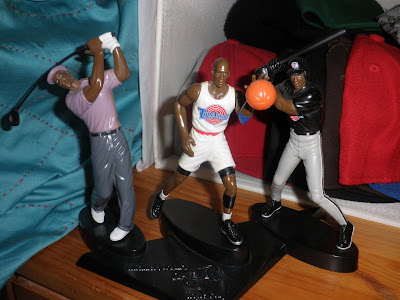 Triple play action? Ok, so he's playing three sports, but the figures are not posable in any way, shape or form so I fail to see where the 'action' part comes in. I like the golf one the best, seeing as its completely irrelevant and unrelated to his career, as golf was/is simply an enjoyable pastime for him. It would be like buying a 'Rick Ross Triple Play Action Set', where one figure is rapping, the other figure is shotting coke and the third figure is sitting on the shitter reading a Danielle Steel novel.

Bought at a car boot for 20p many moons ago, in case you were wondering.
Posted by Enlish at 07:52