Ok, so In a nutshell, this is what happened.

Spent 4 hours at Show N Proves studio and banged out a number of tracks.

Walked to the 02 Academy with Lee to see the beatboxing while drinking more beers.

Got to the 02, Lee had no ticket or guestlist, so I went in, linked Stig, then came back out and started drinking Stella with Lee. Mistake (the Stella).

Stig gets Lee into the beatboxing. Cruger appears and also blags his way in.

We drink. A lot. Hook up with my homegirl Ria and her friend, whose name now escapes me (sorry darling).

We leave beatboxing. I completely stack it on my ass but somehow manage to make it into some sort of freestyle breaking manouver, attempting to turn a complete self par into something that made me look cool. It might have worked, im not sure.

We go to a bar. Im still drinking.

We start a freestyle cypher outside of said bar. I kill the cypher dead by saying something about pizza (I can't remember, ask Lee Scott). I am very, very drunk by this point.

Man with burberry shoes, white jeans, Ted Baker shirt, expensive Sony headphones and Iphone asks me for change. I ask him why. He says because he's hungry. I ask why I should give him money seeing as he obviously has about 500 quid hanging off him. He won't stop. I punch him in the face due to his repeated offending of my sensibilities and apparent selfish 'me me me' complex. A policeman appears. He asks what happened and why. I tell him. The policeman laughs and lets me go. The rich beggar apologises and tells me I've taught him a valuable lesson. I tell him to fuck himself (Stella).

I come home, continue drinking and puffing peng. I stay up till 9am. I wake up at 6pm. Now I go back to bed.

Some of the only photographic evidence of last night - 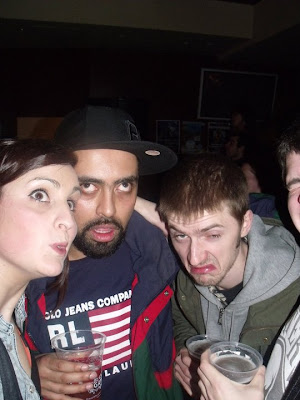 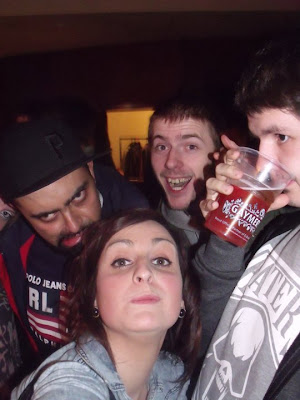 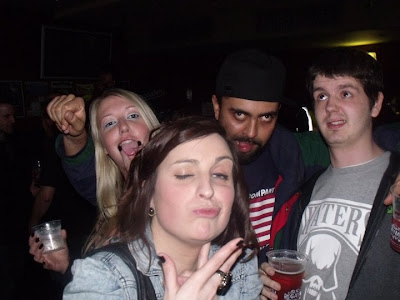 I'm off to Brighton for the weekend tomorrow, more recording, finish Rap Ain't Real LP, go to J Live gig. I may not be posting much the next couple of days. I'll be back though, you can bet your ass on that.