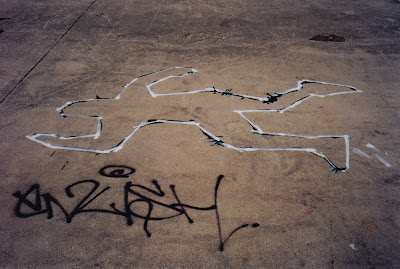 Ok, so back in the day, around 2002/2003 (just before I moved to Brighton) when I was 20-odd (pun intended) there was still the remnants of a buzzing Hip Hop scene in Falmouth. By this time a lot of the luminaries had moved onto greener pastures, but there were still a few of the old heads (myself included) holding shit down, keeping it 100, hard body, real talk etc etc etc.

My boys Mick Glacier and Big Lukey (MPT baby!) used to go and paint on the regs. Unfortunately, us being in a picturesque sea side town and all, there wasn't anywhere you could go and do a throw up without a) feeling like a prick for ruining something protected by The English Heritage or b) getting picked up by the feds IMMEDIATELY. Graffiti is no joke down here.

Anyways, through the local skating community (of which I used to be a part of a long, long time ago) we were made aware of an old abandoned meat packing factory (pause) that was basically falling apart and had been fenced off pending redevelopment. The fence didn't last long, of course, as the skater kids tore the fucker down and proceeded to tear the place up, taking along their own mini ramps, rails and all sorts of shit. So, Mick G and Lukey used to go painting there, and I'd sit about smoking and writing bars, wishing I could paint, draw or either (I can't). It was a fucking excellent spot, tucked away in the back of an industrial estate. Observe - 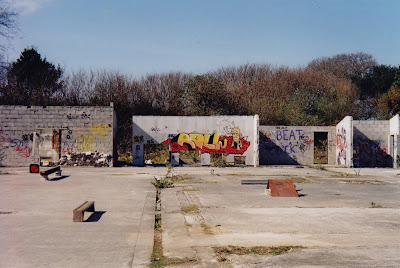 Anyways, after a good few visits to the spot with the fam I started getting restless and bored while they did their pieces, so the next time we were heading up there, I thought fuck it. These were two separate occasions mind you, but both times I dropped about a fiver on cheap shit car paint from Trago Mills and, armed with rough sketches and my geek mind crammed with visions of 8 bit electronic nostalgia, I got to work round the corner from where the real painters were working. Maybe try and imagine Seen and Cope2 throwing up pieces while an ever so slightly retarded friend of theirs does the same thing but a good little way away so as not to embarrass the actual graffiti artists. If I took myself seriously (I DIDN'T), I would be labelled as a 'toy', plain and simple.

Number one : THE PACMAN PIECE 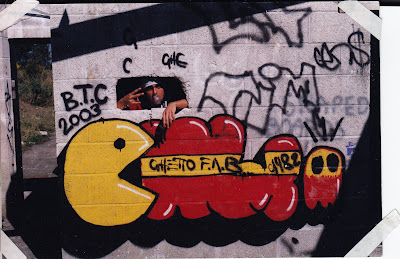 WOW. You can even see me puffing a J through the whole in the wall. Gutter. Notice how the 'E' of 'ENLI' (pronounced EN - LYE) is Pacman himself, and he's eating all the other letters in order to get to the jelly dude? WOW. Just WOW. Not bad for a first try, but obviously still piss poor. Still, it was a sunny day, we had piff, beers and there was nothing else to do. Big. 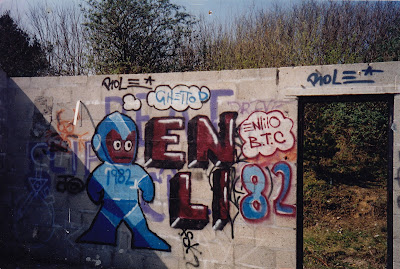 Continuing on the 8 bit NES vibe, I did a Megaman, but with a subtle twist. Notice how his skin is BROWN? That's right, constant reader.... I AM MEGAMAN. Unfortunately, despite the fact my characters are obviously terrible (I did say I wasn't serious), my writing is even worse. To compound this, I ran out of paint while I was doing it, but fuck it, I'm a boss. Notice how I've written 'ENli10' (Enlighten) there? Genius. Plus I threw up BTC. Big up P and all the Bad Taste Cru.

Unfortunately, not long after Megaman went up, the powers that be destroyed the entire site and built some sort of office block on it, effectively once again taking away one of the only places that young people in the area had to go to carry out their hobbies in peace and quiet without being scrutinised by the public and/or arrested by the Police. The 'powers that be' will never learn.

Anyway, that's my graf chronicle. As an added bonus I will show you my very first 'piece' (I like to call it a piece, although that is stretching the truth to breaking point), dropped a few days before I got serious with that jacks worth of auto paint. Such a rookie was I, I did the outline in black and THEN tried to fill it in with white. Then, during the taking of the photo, I leant against it and got paint all over my Phat Farm top. ROOKIE. 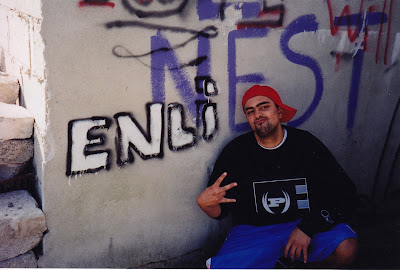 Hahahaha. Shout outs to Mic Glacier, Big Luke and all the old Falmouth heads. We will inherit the earth.