Flight Distance are a 3 piece Canadian Hip Hop crew. They were over here quite recently with a bunch of ofther Canadian and American cats on tour, with Bender also battling Arkaic in a surprise match up at the last Don't Flop event.

Heres the blurb yo :

FD are an Ottawa-based Hip-Hop group consisting of rap duo Bender & Patience, backed by DJ CalKuta. Whether it’s their ultra high-octane, riot of a live show or their cold and calculated recorded material, FD continue to stand out above any act on the scene. The group formed in 2004, and independently released their first EP “The Warning Shot” and the LP, “Run For Your Lives!” in 2005. They have since shared the stage with the likes of GZA, Masta Ace, Brother Ali, J-Live, Shad, Roc Raida (R.I.P.), Jedi Mind Tricks, and the Father of Hip-Hop, Kool Herc… just to name a few. The sample-driven beats of Bender and CalKuta have led to production credits for numerous MCs including Vast Aire of Cannibal Ox. FD have collaborated with Brooklyn Academy’s Pumpkinhead, among others. Flight has played countless shows across eastern Canada, leaving a trail of broken hearts and whiskey bottles in their wake. Recently, they’ve teamed up with producer Crack Moses and are about to tour Europe with OG Hindu Kush from Montreal. Also, Bender is the champ in the King of the Dot rap battle league. Duck and cover. The new album comes out in 2011.

As mentioned above, the boy Bender is a bad boy battle rapper to boot, having just taken the title in the Canadian KOTD Battle league. I told him to tuck the chain on Cold Harbour lane but he wasn't having any of it. The man is technical as fuck and brutal with it. Peep -

Bender, Loe Pesci (OG Hindu Kush) & Me In Brixton (We on some Ralphie shit) 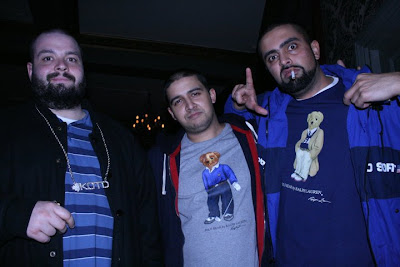 I'd probably usually be a bit more charismatic with it, but I'm hungover, so thats what you're getting. Fuck do you expect for free? Haha