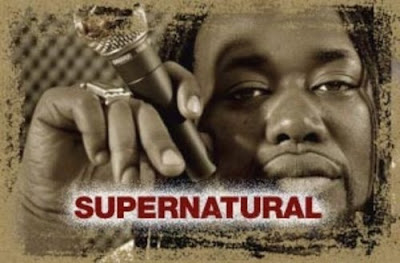 Ok, so the following footage is taken from a show that went down at Camden Barfly about a year or so ago. To cut a long story short, Stig and I did a gig in Swansea last year warming up for Louis Logic and Akil from Jurassic 5. Both of them were/are super sound geezers and Akil informed us that he was playing in Camden a couple of weeks later and very kindly offered to put us on the guestlist.

So, we turn up to the show just as Akil is beginning the part of his set where he brings guests that he rates to come up and spit a verse, which included Stig and myself. We both got up and did our thing, part written part freestyle, which was then followed by this poor Australian chap that you see getting ripped by Supernat. Truthfully the dude was OK but had no mic control whatsoever so nobody could hear a word he said, hence Supernat's line that alludes to that fact. I must admit I don't remember him directly dissing Supernat, however.

Anyway, as you can see from the footage, Supernat starts going in on the dude, cause well, that's what he does. The funny thing is, and I'd forgot abut this, is that I'd drank a sufficient amount of beer to A) feel this attack on the dude was unjustified and B) thought that I was the one to stand up and do something about it. If you pay attention at about the 44 second mark the camera pans across and you see me holding the mic in anticipation. I was truthfully planning on jumping in and sparring with Supernatural... I mean, that would be a pretty cool story right?

Fast forward to 1.33 and the tables have turned. Despite it being less than a minute later, I no longer have the mic because I remember a palpable feeling of terror washing over me as I stood waiting. He'd carried on going for 48 seconds after I'd decided to give it a dig, which is not a long time, but when you're on stage preparing to battle (even more so when you're in a battle getting cussed out) it seems like an eternity. So, for better or worse (probably better) I decided that it was NOT a good idea to spar with the god. Although, saying that now, I do regret it. This footage only popped up recently, I had literally forgot about it until this point. Hindsight is a wonderful thing, but then again, so is not being crucified on stage by a certified veteran. You live and you learn. Observe -

Big up Supernat's faux English accent at the end. He also deserves credit for influencing Scizzahz and Wizard to come up with the term CHWOITTTT!!!!! Long story; you'll have to ask them about that.

Once reminded of this occasion, I scoured the depths of my Mac and managed to find this one photo from my trusty Nokia N81, before it packed up. Taken that night, Akil is not in it, but you can see myself, Stig, Supernatural and Louis Logic, who I think you'll agree could win an award for 'Mincer Of The Year' right here. Comedy. 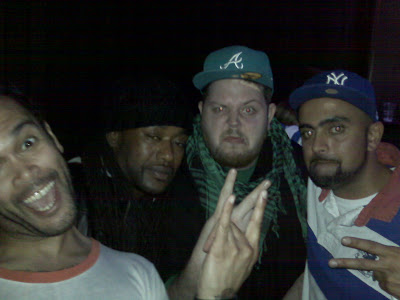