Foods Of The World Vol. 1

Whilst sitting here considering which of the various subjects I tackle on this blog to write about today, I decided it was high time to introduce a new one, albeit one we can all indulge in.... FOOD. Everyone has to eat, a lot of people take enjoyment in eating, some do not, but the fact remains; fan of Hip Hop or not, there comes a time on a daily basis (for most) when food must pass your lips to avoid a major disaster. That's certainly the case with me, and depending on who you talk to, you may hear a whispered rumour that a little too much food has been known to pass my lips from time to time. I don't give a fuck, I wasn't born to have a Peter Andre 'Mysterious Girl' 6 pack, I'm a British man; I eat pies, drink beer and have a metabolism about as quick as Stephen Hawking on a Formula 1 track.

Anyway, I digress. As some of you may or may not know, from September 2009 until May 2010 myself and Lil' Tika (my wiz) travelled the world in search of fun and debt, which we pretty much found in every place we visited. During this time we of course managed to sample many delicacies unfamiliar to our British palates and duly photographed many of them. So, without further ado, Foods Of The World 'proudly' presents volume 1 : The Bean Curd Milkshake. 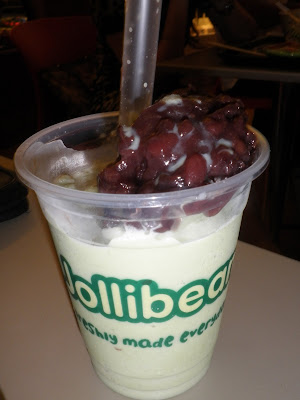 BLLEEUUURRRGGHHH. Still looks disgusting. This was purchased from a shop in Singapore airport called 'Jollibean', much as you might purchase a coffee from Starbucks. They literally sold variations of soy milk with various bean curds, and that was it. Needless to say, I DID NOT buy this, but my lady did; I opted for a beer at the bar instead. To be entirely honest I can't remember if I tried it although I most likely did as I'm not a pussy, but my memories of it are not good ones. I mean, look at the picture; it is certainly not the most appetising concoction to look at. If you have any knowledge of soy milk (which I do, unfortunately) you will know it tastes like liquidised cardboard. Add some flavoured bean curd into that bitch and you have pretty much cocktailed my idea of hell in a cup. Lil' Tika enjoyed it... fuck knows how though. I mean, look at it.
Posted by Enlish at 03:55