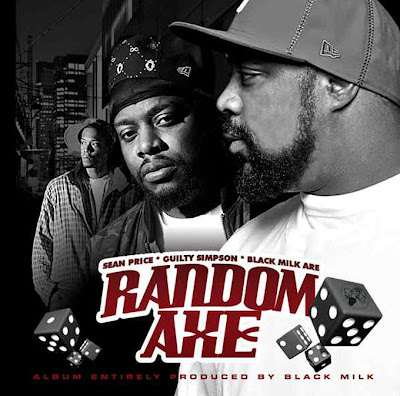 So, if you weren't already aware, Random Axe played last night and myself and Lil' Tika went along to see what was good. The last time I was at the Scala was back in February for the J Dilla tribute gig and was therefore not surprised to find that the venue was nowhere near capacity; thats not an insult to Random Axe, but more a compliment to the memory of Dilla, I'd like to think. Anyway, Tika & I went out to get some dinner and turned up to the spot around 10ish, meaning we stupidly managed to miss Jehst's performance and all of the warm up DJs apart from Mr Thing, who had about 15 or 20 minutes left to go in his set once we'd settled in.

The place was pretty packed, but not rammed, so we quite easily managed to get right to the front with only one row of people between us and the stage. Black Milk came out first and dropped 'Zoo Drugs' before Sean Price came out and dropped Figure Four, a personal favourite of mine if only for the fact that he starts the track with the single word 'Botswana' and of course shouts out Hex Murda (get well soon Hex).

I was pretty hyped at this point as, despite the fact that P is one of my all time favourites, I'd never seen him live before (despite my best efforts to the contrary), and he didn't disappoint. I'd heard mixed reviews of Sean P live and must admit that some of the videos I've seen on youtube dont seem to involve much more than him standing completely still on the stage and delivering his verses with a fitted pulled down to hide his face. On this occasion, however, he was mad energetic, bouncing around the stage, interacting with the crowd and joking about, including persistently referring to an imaginary person as a "penguin looking motherfucker."

Black Milk was comfortable behind the decks and also came out to knock out a couple of verses including the 'Everybody, Nobody, Somebody' joint and The Matrix (sans Pharoahe Monch, which was a shame). Proper did his thing though, very impressive, not only for the fact it was hot as hell in that bitch and he kept a puffer jacket on for pretty much the whole set.

I must admit though, Guilty Simpson absolutely SMASHED it. Proper mic control all night, no slip ups and flowed like water. A lot of the tracks he was rhyming on Black Milk cut the beat out completely and let him ride it accapella to the hook, and boy he was completely on point, his timing was impeccable. I did feel a little sorry for the dude, I must admit, as both him and Sean P did a couple of solo joints each, and very few people seemed to be familiar with his solo material (which was the opposite in the case of Sean Price). If my memory serves me correctly, which it often doesn't, Guilty dropped 'Get Bitches' and 'The Shining', Sean P did 'Boom Bye Yeah', 'Let Me Tell You' (the Beat Butcha joint, big up Butchy) and also a new, Alchemist produced joint from his forthcoming MIC Tyson LP. Couldn't tell you what it was called as I'd drank too much overpriced Red Stripe by that point to absorb any new information.

Another nice touch was that Sean P brought SAS (Mega & Mayhem) up on the stage to drop a verse. I've always been a fan of their music so it was cool to see them up there, it also made me wonder why we don't see/hear more from them. Guilty Simpson finished proceedings up with an accapella verse from 'Cali Hills', a fitting ending given the obvious Detroit association and the venue itself playing host to the Dilla tribute gig. There's probably more, but truth is I can't remember thanks to Stella and Mary Jane. Cheers ladies, pleasure making your acquaintance. Again.

So, all in all, a complete smash of a show which was a great look considering I hadn't gone in there with high hopes due to some of the not-so-good reviews I'd heard. I left drunk and inspired which as a result saw me staying up until 5 this morning penning bars, drinking cider and smoking wacky backy. Good times.

I took numerous photos on my Android, but because of the smoke machines they all got fucked up. These are the only 3 that are even vaguely decent - 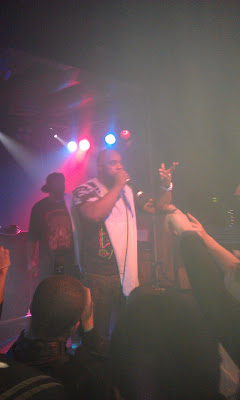 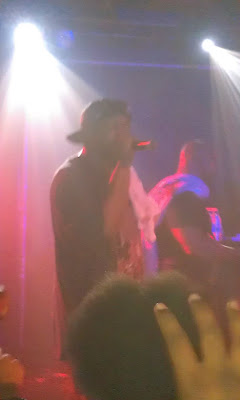 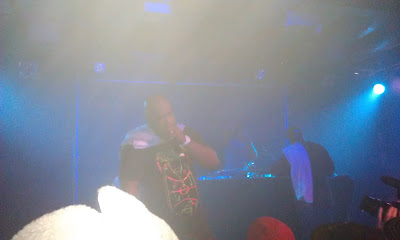 I also took a bunch of videos but unfortunately they're all fucked as we were too close to the speakers and the sound has come out completely distorted. Luckily someone else was there last night and in a better position to record, so these videos come courtesy of youtube user 'essdilla' (many thanks). Still not perfect due to the acoustics in that place but you get the picture.


Check this one at the 0.34 second mark, you can clearly here me doing my ridiculous scream sound that punctuates so many of my tracks. Classic.