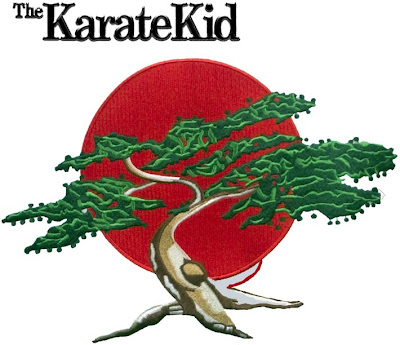 Ok, so if you hadn't noticed by now, I've got somewhat of an affinity for The Karate Kid (the film, that is, of course). I think this is mainly attributable to the fact that it is one of very few films that I saw as a youngster that has actually maintained its appeal into my adult years, unlike so many others (the original Adam West Batman flick, for example). As a child the film inspired me to take up Karate myself (due in no small part to the 'You're The Best' montage at the end tournament and the now legendary yet totally unfeasible crane kick), until I had my ass royally kicked a good few weeks in a row (see here for details). As an adult, it is the music, scenery and script that now hold the most interest for me... I mean, people actually came up with the concept of Mr Miyagi and the riddle filled wisdom he spouts at LaRusso; Bill Conti murks the score (panpipes included) and its just one of those flicks that I can happily go back to over and over again that inspires me to go out and crane kick kids in their early 20's dressed in skinny jeans and snapbacks.

Anyway, as coincidence would have it, youtube suggested the following video for me, and what was I to find but the director himself, John G Avildsen, had uploaded the entire film in its original form, i.e. the rehearsal tapes that were made before principal photography began, deleted scenes and all. This may not interest many, or indeed any of you, but I am an absolute fucking geek for this shit so it interested me, and thats what matters. Here follows the first part of 12 in all; the other 11 are easily locatable once you've watched this, should you feel the need. Observe and enjoy.