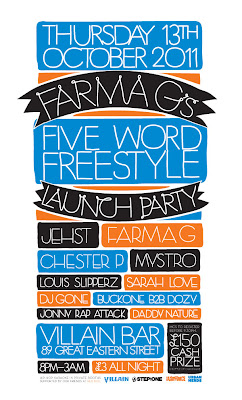 This occurred a couple of weeks back, with yours truly entering. I pop up around the 0.35 mark and drop two bars of pure fire. As you might be able to tell from the footage it was an incredibly close call and the crowd had to be asked to make noise 3 or 4 times over. I ended up getting knocked out at this point, which was the second round. My main fear when entering battles is getting knocked out in the first and seeing that my name was first out the hat AGAIN the pressure was well and truly on, but the first round proved to be no problem whatsoever.

I'd be lying if I said I didn't think that I won this round, but such is the case when decisions are left up to the crowd rather than a panel of judges (there was a panel of judges, but they were judging on the crowd reactions, of course). Luckily (in a way) this is a situation that I'm familiar with having been 100% cheated out of winning battles I'd clearly taken in the past when judged by the crowd. I'm not bellyaching or being a sore loser, but truthfully I felt that I took my round (no disrespect to Ed Greenz) and that £150 would have come in incredibly useful. Still, it is what it is. Big up all the competitors, crowd (some of them, haha), Farma G, Chester P, Mystro, DJ Gone, Mr Thing, Louis Slipperz, Sarah Love, Newborn and the whole gang that was inside.