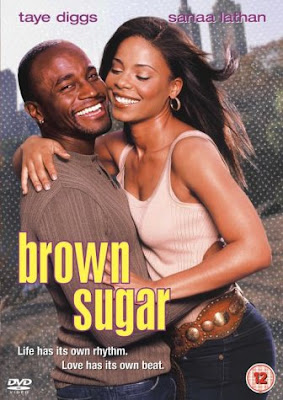 OK. So, a while back, Lil' Tika convinced me that it was a good idea to watch Brown Sugar starring Taye Diggs and that chick from Alien Vs Predator. I won't delve into the plot and story line of said film, all I will say about it is that in a few places there are some very poignant comments made about Hip Hop culture, which I did appreciate, but more often than not these poignant moments are drowned by typical rom-com schmultz and awful script writing. However, if you want to watch it, I will let you be the judge.

The thing that struck me most about this movie, mainly because I was mad high in anticipation of watching a flick I didn't really want to see (getting high before embarking on these experiences can often soften the blow and in some cases actually make them enjoyable) was the severity of Taye Diggs hairline (see the picture above... Im sure they've airbrushed more hair in there). The image stuck with me for some time before once again popping into my head the other night (no homo, naturally) while I was lean off that good cheese and strawberry kush mix. Anyway, in my stoned haze of self amusement, i took to twitter to voice my opinions, and here follows the fruit of my labours.

As an aside, Taye Diggs now sports a cleanly shaven head. I would like to think that I had something to do with that.

#TayeDiggs hairline is more fucked up than @realdrsyntax's eye sight

The Elephant Man looked at #TayeDiggs hairline and said "Wow, that shit is fucked up"

#TayeDiggs favourite #NWA track is "The Dayz Of Way Back"

Someone told #TayeDiggs to 'get his shine on'. Dude took it too literally

Hey, #TayeDiggs - When Jack said "We need to go back" in #Lost he wasn't talking to the hairs on your head

#TayeDiggs obviously never watched 'You Don't Mess With The Zohan'

#TayeDiggs auditioned for a part in Barbershop. No dice

Damn it, this dude actually went to the barbershop and asked for a #TayeDiggs. http://twitpic.com/5m59bi 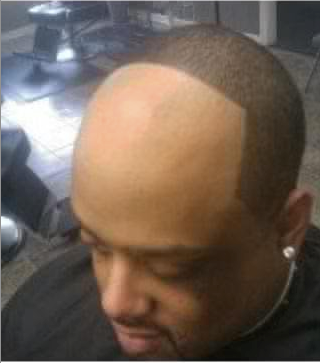 Q : What did the casting director ask #TayeDiggs? A : "Can you say wig?"

Probably time I stop with the #TayeDiggs jokes now seeing as baldness is hereditary in my family, but then so is being a boss so whateva man

#TayeDiggs burst into tears while watching 'Hairspray'. And not the film, an actual can of hairspray being applied to real hair

David Attenborough described #TayeDiggs head as "... A wasteland, similar in scope to the Australian outback...barren but for a few weeds"

Just project SAVE OUR SCHOOL onto #TayeDiggs fivehead... No need for costly canvassing campaigns, the whole world will see it

If the eyebrows are Greek and the hairline is Turkish, its a fair comparison to call #TayeDiggs head 'Cyprus'. Them 2 are NEVER making up

If #TayeDiggs hair could speak, its catchphrase would be "I'm watching your back"

Soldiers have been advised that instead of yelling "Retreat!" when leaving combat that they are now to yell "#TayeDiggs hairline!!!" instead

If anyone wass to accidentally or purposefully push you backwards, from this point on you should say "Quit Taye Diggsin' me" #TayeDiggs

"Its easy to see when you look at me, if you look closely, Fifty don't #TAYEDIGGS"

My car has 6 gears. One, two, three, four, five and #TayeDiggs

I think the last one was my favourite. RIP Taye Diggs hair.
Posted by Enlish at 09:34