Time for another new segment, once again with thanks to Eddy Piranha who had these hidden away in a dark corner of the attic. I used to be a massive basketball fan, both playing and following the NBA. Unfortunately, many teenage summers spent pounding up and down the concrete have left my knees and ankles completely and utterly fucked, so I'm only really good for a game of H.O.R.S.E. these days. Also, as soon as the 96' Bulls team split up, I pretty much stopped following the NBA. I don't even know who took the title this year.

Anyway, I found a stash of upper deck trading cards from the 91/92 season in The Piranha Tank. I vaguely remember picking up hundreds of these for an incredibly cheap price, mainly due to the fact that they were all complete nobodies and therefore none of the cards were collectors items. The best thing bout this pointless stash, however, is the amount of completely random, ugly, bizarrely named and, according to their stats, shit basketball players. The fact that they're white is not a race issues, but with the exception of a select few we all know that white dudes have never been part of the NBA elite, plus the haircuts, retro uniforms and goofy ass kicks are a touch. So, without further ado, i present to you - 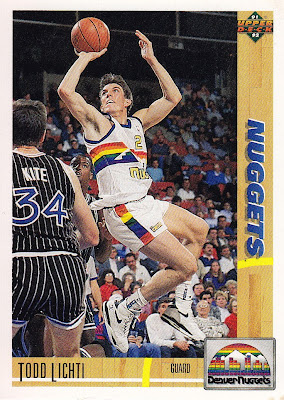 In all honesty, Todd wasn't doing too badly at this point in his career, or so it would seem. Jumping from an 8 point to a 14 point average in a year is quite impressive, but a closer look reveals that in the 89/90 season he played 79 games (out of 82 regular season match ups), whereas in 90/91 he only played 29 games. Still, at the time he was ranked second on his conference's all time scoring list. I don't really understand how that is possible in the slightest from looking at his stats, but it says it on the card, so fuck knows.

Anyway, thats not the point. Check the goofy motherfucker out. Its fair to say that somebody likes short shorts. His kicks are nice though. At least he's not rocking Pony.
Posted by Enlish at 05:09