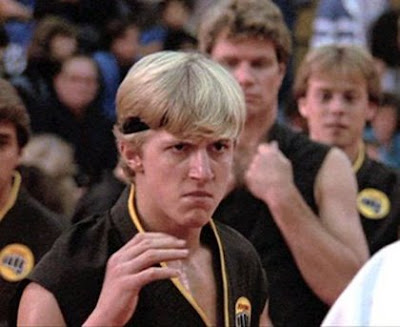 When the original (and therefore the best - I'll give you my opinions on the remake at a later date) Karate Kid dropped in 1984 I, like millions of other children and teenagers around the world literally lost my shit (although, obviously, I saw the film in around '86 or so when I was just about old enough to vaguely understand life, in the most simplistic way, of course). At the time it was the single greatest movie I had ever seen and it led me, undoubtedly like millions of other children and teenagers around the world, to demand my mother send me to karate lessons lest I start crane kicking the shit out of every single person and easily breakable object in my proximity. Luckily for me, there was a weekly class held just down the road from my gaff that my friend had already previously joined a week or so earlier, having smashed his parents with an identical form of nagging/complaining/whining. 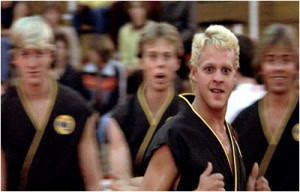 Unfortunately (as it later transpired), I took to the classes like a duck to water and quickly advanced to a yellow
belt, proving myself as superior to every other kid in my age and belt bracket. 'Why is that so unfortunate, Dave?' I hear u say. Well, due to my accelerated proficiency at the practice of the way of the open hand I was deemed as being skilful enough to start sparring with dudes a couple years older and a couple of grades more qualified than I. This promotion not only included being dropped in way over my childish Daniel-San-esque expectations of car waxing and yard work but also led to a switch up from light to full (& heavy) body contact sparring, the only saving grace being that my pretty face was out of bounds to any enquiring fists and feet. 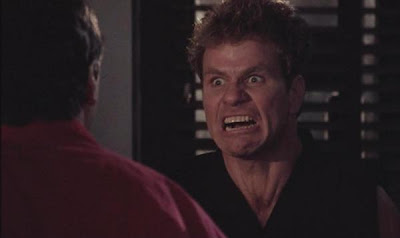 The problem was that the rest of my body was fair game. After 4 or 5 weeks of getting my ass whipped up and down the karate club combined with the initial euphoria that the film had introduced to my then fresh and pre-pessimistic mind becoming a distant memory (VHS rentals were not a daily occurrence), I went home with my proverbial dick in my hand and a hi tek halfway up my ass and kindly requested that I not have to go back again. Ever. My mother obliged, begrudgingly. 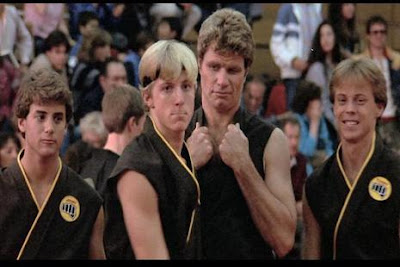 In all honesty though, Jonny Lawrence and the rest of the Cobra Kai dudes scared the shit out of me when I was a kid. If you remember correctly, they didn't just bully Daniel Larusso, there are two specific points in the film where they essentially attempt to murder him (chucking him off the bike, beating the living shit out of him on Halloween before Miyagi comes to the rescue). Without sounding melodramatic, I kind of related to the character of Larusso, me being an obvious ethnic addition to an otherwise white-and-blonde landscape of spoilt, rich bullies (some, not all, obviously). 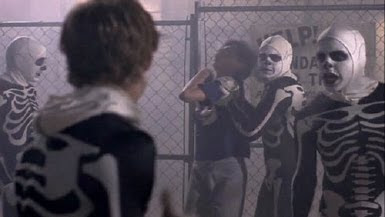 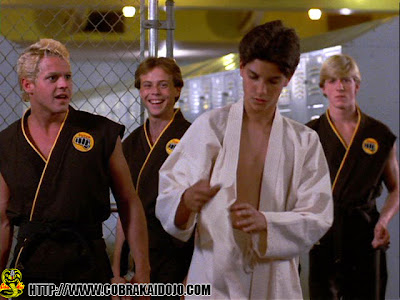 Of course, without delving too deeply into the whys and wherefores of my childhood, the bullying I dealt with occurred throughout my teens, but having not retained any of my Karate training it was mainly ended either by my mates (of which Daniel San had none) or by my own erratic haymakers and dump tackles. As I grew older, they became drunken haymakers and rugby tackles, which seem to be all the more effective. Basically, if you're going to get bullied, make sure that you and your assailant are both shit faced drunk and everything hurts a little less for both parties. Its lucky Miyagi didn't follow my advice, otherwise Daniel San would have ended up with a mean sake addiction. Just saying. 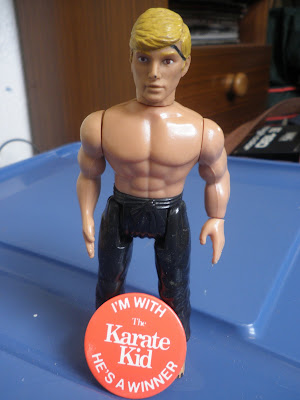 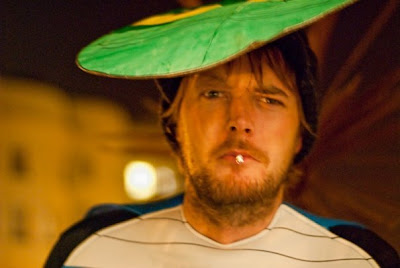 A good friend of mine, from Cornwall, had this to say on the matter -

"I remember trying out the Krane kick on a kid called Kevin Williams when I lived in Gibraltar, I didn’t like him, and I did it without warning. The poor guy had an asthma attack and his mum banned our family from the local grocery store. My p’s never let me go to any type of martial art class after that incident. Incidentally, Kevin was sent to the Gibraltar Karate club by his Mum, and after three years of Miyagi-style training, he managed to obtain a black belt and then he used his skills to punch my tooth through my lip in a playground incident. Fair play to him really."

Aaaaaahahahaha. It's the chronicles, baby.
Posted by Enlish at 03:26