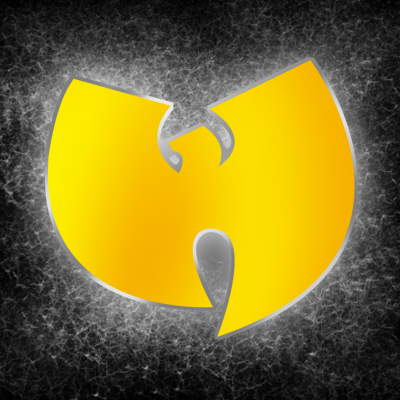 Now, before I started writing and rapping, before I started DJing, shit before I even lost my virginity one thing was made completely and utterly clear to me. By any means necessary I had to be able to freehand a Wu Tang symbol that was as close to perfect as was possible. This particular endeavour began in 1993 at the age of 11 and continued on until around age 19, so in essence what I'm saying is that I spent the best part of my time in full time education dedicated to drawing hundreds and hundreds of W symbols instead of actually paying attention in class. They say you should live life without regret; then again, hindsight is a wonderful thing.

Anyway, on one of my recent architectural digs in THE PIRANHA TANK I came across an old 6th form college diary from when I was 17, complete with a Thirstin Howl 'Polorican' sticker on the front and containing far more crude Wu Tang symbols and absolutely AWFUL rhymes (in my best attempt at 'grafitti handwriting') than references to or evidence of actual college work. I'm not saying I was a bad student, I was actually pretty good, but it was somewhat of a blast from the past to see exactly how obsessive I had become during that 6 year period. Unfortunately it seems that my ability to draw Wu Tang symbols and my ability to write lyrics were pretty much on par with each other in 1999. Thankfully my abilities in both fields have improved since then (I hope).

I don't really know what the point of this is, but I scanned a single page from this diary, and here it is, complete with one 'lyric' on the page (you will see what I mean about the handwriting). There was a whole 8 or 12 bars underneath but upon reading I deemed them to be so incredibly embarrassing that I decided to omit them from the picture for my own protection. The one that is there is more than enough. 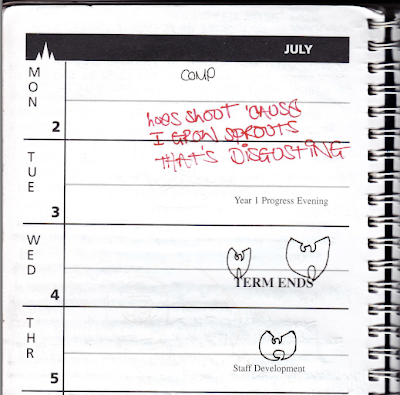 "Hoes shout cause I grow sprouts - that's disgusting." Genius stuff. It actually shows I had a basic grasp of multi syllabics, but funnily enough that one line never found its way into a verse entire. There's stacks more of these in The Tank, literally stacks and stacks, which I will aim to rifle through next time I'm headed back to the motherland.

And in case you were wondering, the years of dedication and study paid off. I can now draw a virtually perfect Wu symbol without any visual aids (pause) or tracing paper. Like they say, no regrets. No regrets Dave, no regrets.

*Edit* - Google chucked this up, one that Method Man drew himself. Im officially better haha 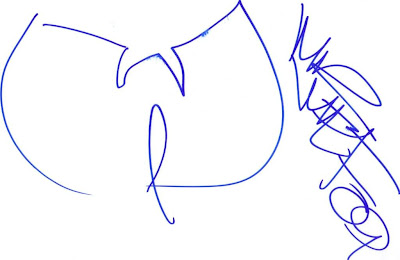