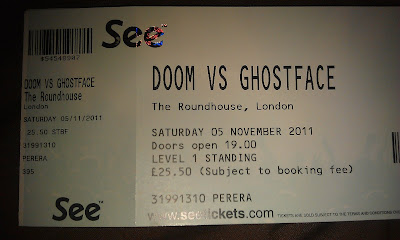 ..... Or, more accurately, Rocky Vs a cow carcass or a German Luger Vs a water pistol. To be entirely honest, after being somewhat excited to see this gig, I thought it was a pile of horse shit. Please do bear in mind that this is my opinion and my opinion only; everybody who was there (which was upwards of 1200 or so people at a rough estimate) has a different opinion I'm sure, you only needed to have a pair of ears to hear people all across Camden talking about it after with everyone's view on the gig seeming to differ from the next mans. Here followeth my own.

Not knowing exactly what to expect as I'd never been to The Roundhouse before, I was firstly taken aback by the size of the place. Pretty fucking big to be exact and a lot bigger than I'd expected. The fact that I'm not a fan of being with a lot of people in one place (the irony that I live in London is not lost on me) saw this being an immediate setback as, for some reason, I assumed that this gig would be more of a lowkey affair, mainly attended by hip hop fans of the more mature persuasion. I was completely wrong.

Snapbacks and skinny jeans as far as the eye could see. Wafer thin V neck T shirts exposing intricately stupid chest tattoos. Girls running around the shop screaming like it was a school disco or something. The main floor of The Roundhouse has a number of poles placed, funnily enough, in a circular design to (I assume) help keep the roof from falling in. During the entirety of Doom's set there was a young man, probably around 19, about a foot off the ground clinging to one of these poles and humping it as vigorously and in such a way as you might expect an un-spayed adolescent puppy to treat the leg of an important house guest. Very, very unusual. 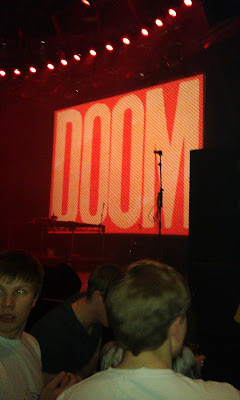 Anyway, in short, Doom and Ghost didnt spend any time on stage together at all, which sort of defeated the object for me. Doom's set was first and was very similar if not identical to the last time I saw him. The fact is the last time I saw him I was completely and utterly drunk beyond belief, something that I regretted massively at the time. Seeing him this time around and being sober proved to be far more rewarding and if nothing else bolstered my memories of the first gig as it was, in essence, exactly the same. Doom has good presence on the mic and also possesses the ability to rap all of his verses all the way through from beginning to end without relying on a hypeman to finish his lines. An admirable trait and one that not enough MCs are au fait with these days. His set mainly consisted of tracks from the Madvillain LP with some of MMM Food?, Dangerdoom, King Gheedorah and (not enough) Operation Doomsday sprinkled in. Thorough yet unremarkable.

Ghostface came on next after a kind of bizarre intermission where the lights came back on and everyone got to see each others faces, a pretty scary experience halfway through a club night when nearly everyone present is rabidly drunk and sweating like a blind lesbian in a fish shop. it was at this point that I decided to go for a piss, which proved unfortunate as many others had the same idea. It also then occurred to me what a massive sausage fest the night was. The queues for the blokes toilets were 20 or so deep; the queues for the ladies were non existent. While I was waiting to piss I could hear that Ghost was on the stage but, not wanting to piss myself, continued queuing in an orderly fashion for the (flooded) toilet.

I'm not entirely sure what I missed in that 10 minute period but when I got back in to the main standing area I was presented with the oh-so-familiar sight of an American rapper sloppily stumbling through a celebrated back catalogue of songs with all of the pin point precision of an epileptic tattoo artist inking wet skin in a dubstep rave. He had 2 or maybe 3 hypemen, 1 of which was Trife and all of whom had mics that may as well had been turned off. Ghost would spit half a line and then stop in order for his 3 hypemen to finish it, but seeing as their mics were virtually non existent the audience (from where I was standing) were then treated to half a bar of silence instead of the completed stanza. After whipping through an unremarkable selection of solo tracks from his various projects the set essentially descended into an ODB/36 Chambers karaoke with no one on the stage really doing anything other than stumbling around while the instrumentals were playing while the DJ continually hit the 'airhorn' and 'explosion' buttons on his sampler. And that was about it.

As stated, these opinions are my own, and in all honesty I thought that the gig was a pile of horse shit. I wasnt the only one either as I overheard many conversations afterwards with people saying the same thing, but then again I also heard a lot of people singing both of their praises and saying it was the best concert they'd ever seen. Horses for courses innit. Disappointed, and to top it off I caught some sort of funky virus off of one of the skinny jeaned fags in there which has layed me up for the last 3 days. I can think of a lot of different ways in which the 70 odd quid I spent could have been used better, but hindsight is a wonderful thing.

I wont go into my Mrs going back stage and being hit on by Ghost and all his cronies. Its almost as if they were aware of the injury they'd caused me personaly and wanted to add a little insult into the mix to spice things up.

Here followeth a few flicks of Doom on stage wearing his bizarre camouflage costume. Didnt attempt to take any of Ghost, for obvious reasons. 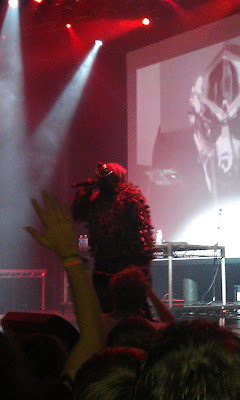 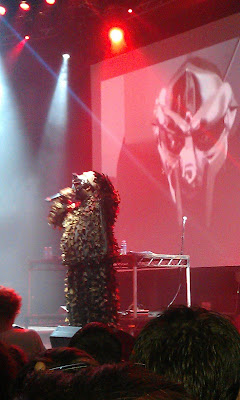 In conclusion, A) Random Axe was much better and B) I wish I'd gone to see Elzhi at the Jazz Cafe instead of going to this. Simple as.
Posted by Enlish at 03:27